There should be giants here.

Lou and I are standing at the look-out at the top of the Liffey Valley, at the top of the Tiers crowned with dolerite pillars, opening up onto the moorland plateau that runs down the centre of Tasmania. I think of the giant City Ruinous and of hot baths at Harfang in C S Lewis’ The Silver Chair. 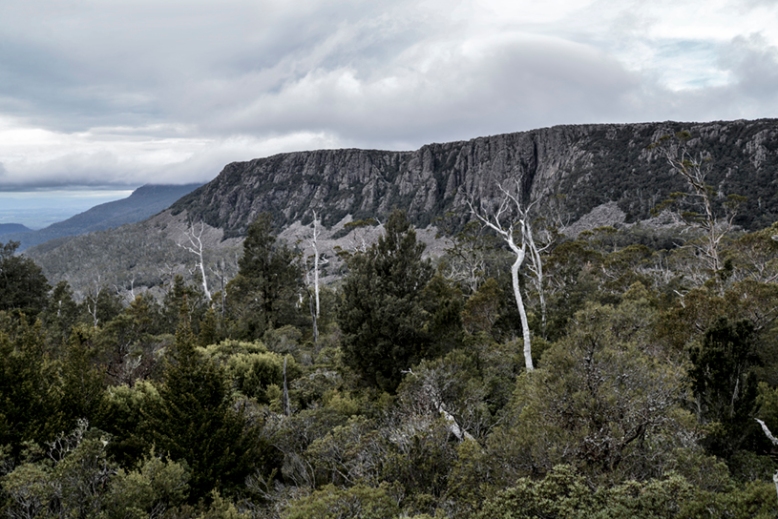 It smells clean and cold from the top of the cliff looking down over the valley and the Northern Midlands opening out below. This time we don’t have a particular plan – just the idea that we could follow the track down into the valley, maybe find the Liffey River. Maybe. We step down off the viewing platform and into the transitional scrub, still tough, small leaved and alpine. As we descend it smells greener and more of rot and fungi. There is surprisingly little smell from the damp little patches of toilet paper and whatever they hide. Poo rots pretty quickly. Toilet paper doesn’t.

We step down, down into forest, but the bones of the place are all tumbled stone. We are climbing down through the remains of an old boulder field, now covered in an open myrtle woodland of silver-grey and green, and moss and lichen of a thousand creeping textures. The mountains are throwing down their dolerite crowns and the remnants tumble down their sides.
It is my first time hiking without my daughter, and the furthest away we’ve been from each other since she was born. But it’s also my first time in a long time walking in the Tiers; the first time in a long time bumping down a track half on my bottom, or placing my feet with painful care down the ladder of slippery tree roots and pivoting rocks.

A 22 year old ankle injury sometimes flares up before a big change in the weather, and it’s aching now. We know the weather will turn later today, and this just confirms the BOM’s prediction. My body has changed post pregnancy – I have wobbly, clicking knees, and it feels like I can’t quite trust my joints, making me panic that I’ll never be able to do this kind of walking properly again. I’d forgotten how much I love it: it requires your whole body, your whole attention as you twist and turn down a ladder of roots and loose rubble, and go down on your bottom and knees. It’s the most physical form of meditation I know. In the south when I’ve walked it’s all been broad cleared paths or fire-trails. I wouldn’t have believed how much I’ve missed this Tetris of hands, feet, bottom among the slippery tree roots, rocks and leaf mould. I don’t think it’s enough for me to just follow the broad paths anymore.

Lou looks a bit concerned and asks if I’ve thought of those hiking poles.

Then there comes a point where I am going back seven years with every step, deep in the throes of a wild love for my adopted home, walking other forests like these: Split Rock my favourite, Lower Liffey, the Ball-room Forest at Cradle, and later, Rinadeena Falls. Myrtle Forest back of Wellington in the south. All myrtle forests, with the silver trunks, the strange twisted trees, the heart-shaped leaves that form paths of golden brown at your feet. They are all the same trees, but no myrtle tree is like another, but shaped by weather, lichen , rot and age into a thousand shapes, and no myrtle forest is like another either. Each has its own textures, its own flavours and configurations of trees, rock, water, decay, and their different fragrances through the year.

I am remembering a story I wrote for the myrtle forest in Split Rock: a chilly story of a silver-limbed forest man, crowned with branches, stars and fungus, and a woman who leaves her home and disappears into the mountains following him. I’m remembering what I said then: that everything looks like something else in a myrtle forest: trees look like castles, outstretched hands or rocks. Rocks are covered in green shaggy pelts of moss like crouching beasts begging to be touched. Because you are walking on a decaying boulder field, the very ground is unstable beneath the loam as rocks turn and springs bubble up and fungi sprout beneath your feet. I find myself telling these stories to Lou as I walk.

This particular forest is full of illusions. It looks open and free of undergrowth but the middle distance disappears into silver grey trunks and deep green leaves. We’re following the curve of the mountainside as it folds towards the Liffey River. We can see where it should be, can guess the distance even if we can’t see or hear it precisely. Where will we stop? On a trail where we don’t really know the destination, and can’t see ahead more than twenty or thirty feet, how can we say for certain when we’ve arrived? We have to pick a place, an arbitrary goal.

We picnic by a brook that tumbles over the
square steps of the boulder field under the trees. Lou fills her bottle with water from the stream and offers it to me, but thinking of little squares of toilet paper above I decline.

While we eat our sandwiches, Lou says she thinks of thylacines: how she wants to see them. She wonders how the forest and wild places would change for her if she knew they were still there.

I say that for me it’s the old people, the first Tasmanians. I never walk without seeing them in my mind’s eye, walking alongside or coming to look at the strangers before leaving on their own business.

We’re both haunted by absences after a fashion. But the forest is full. Not empty, not lonely. Walked, known, touched, smelled, felt with all our senses. Weed in, poohed in too, as the little squares of toilet paper by the lookout show. There are many more stories and memories than mine or Lou’s and that’s just fine and how it should be.

The forest is populated, and somehow also we populate it with beings of myth, imagination and story. As I walk, now I am thinking of Tolkien’s elves talking to trees and rocks, naming and talking until things wake up and start talking back. Here it’s like they’re awake and speaking on the edge of hearing in a language on the edge of my understanding. It makes me feel so happy. The rocks could rise up and walk, and the forest trees peer with intelligent eyes like Fangorn and I would not be especially surprised.

I tell Lou about the Raven King in Susannah Clarke’s master-piece Jonathan Strange and Mr Norrell. The great magician the Raven King has one foot in Fairy and one in England. He hears land and sky speaking. He can understand their speech and can speak in words they understand. His prophecy is that the English will never again understand the words of stone and tree and sky and rain but that this is at the heart of magic, to speak and be understood, to listen and understand. This is how this forest makes me feel. Like it means something beyond ‘tree’, ‘moss’, ‘wind’, ‘creek’ – like it means more than one thing – like it is speaking over and over and over and I am right on the edge of understanding what the rocks, the moss, the trees, the wind are saying.

We stop and listen. It is so, so quiet we can hear the wind roaring up another mountainside in the distance.

A bird is singing.

Maybe it almost doesn’t matter whether it’s the stories or the trees speaking, or it’s us. Storied land, storied forest – storied, sung, en-chanted.

The change in the weather comes. The wind blows up the valley, cold and promising rain.

I check. Yes I do have a mobile signal. I have a text from my husband. He and my daughter have seen the dinosaur exhibition and crawled around the trains at the Queen Victoria Museum, and watched the macaques at City Park. But she’s getting tired and grumpy and it’s starting to rain in Launceston. And here is our arbitrary goal: where we both say it’s time to head back up the path.

Like always, it goes more quickly returning. My legs feel stronger, like they’ve finally remembered how to move on a mountainside and I laugh. The wobbles were just low blood sugar, and vanished with lunch. 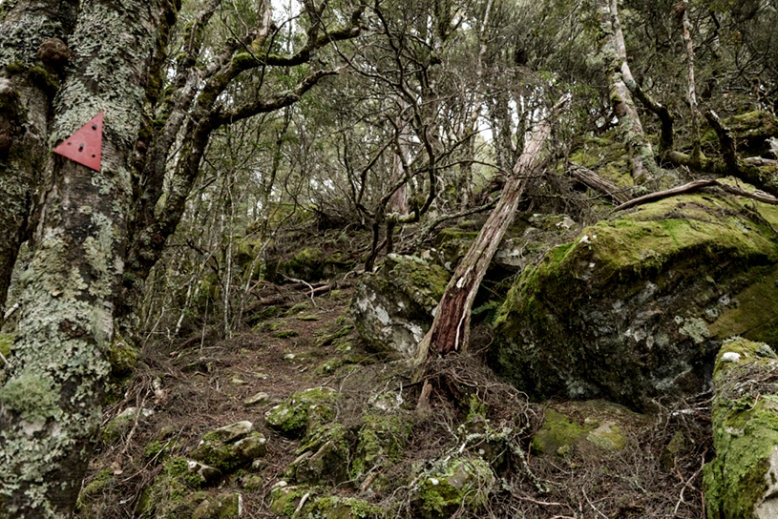 Dare I tell stories of a stolen country? How dare I not speak my stories of the forest man and the star belly, the buried woman who rises pregnant from the leaf mould and mud? Of the artist wooed by the forest man of silver myrtle, shadows, rot and tiny leaves? They rise from me like springs. 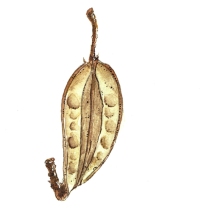